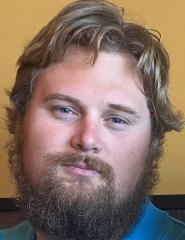 We are sad to announce the passing of our beloved son, David Chandler Rourk, II on November 17, 2022, at the age of 31. David passed away in NHRMC from a sudden and rare basilar artery dissection. Our family is thankful for the compassionate care that he received in the ICU, and appreciate all of the prayers.

David was born in Wilmington, NC to Glen David and Anne-Marie Couvillon Rourk on February 10, 1991 and was raised in Shallotte Point, NC with his sister Aimée Catherine. Named after his father and grandfather, “Little David” grew into a man of great stature, standing 6’4.’’ He was strong, vibrant, and full of vitality. Once you met David, you’d never forget him.

David’s life ebbed and flowed with the tides on Sasspan Creek, where the Dock House was homebase for a community of friends. The Shallotte River was David’s Sanctuary. His camouflaged Havoc Jon boat was a life-line for him and his Doberman side-kick, Shadow. If David wasn’t working, he was running up the River, or running out to the Stream.

David was a member of Shallotte Presbyterian Church. He received his Associates Degree from Brunswick Community College, worked as a Contractor for Duke Energy, and was currently employed with BEMC at the Control Center. He leaves behind his parents David and Anne-Marie Rourk of Shallotte Point, his sister and her husband Aimée and Alex Sasser of Hallsboro, his paternal grandparents Shelby Leonard Rourk and the late David Chandler Rourk of Shallotte, his uncles Leonard Chandler Rourk (Tracy) of Shallotte Point, Frank Anatole Couvillon and David Brewer Couvillon of Honolulu, HI, and his cousin Caroline Augusta Rourk. He was preceded in death by his maternal grandparents Frank Anatole Couvillon Sr. and Margaret Brewer Couvillon of Ocean Isle Beach, and his aunts Kay Couvillon Austell (Larry) and Aimée Clara Couvillon. In addition to his family, David leaves behind his devoted girlfriend Haley Long, his constant companion Shadow, and an Open Book of stories filled with a lifetime of friends.

Funeral Service will be conducted at 2:00 PM, Tuesday, November 22, 2022, from Shallotte Presbyterian Church. Interment will be in Gurganus Cemetery.