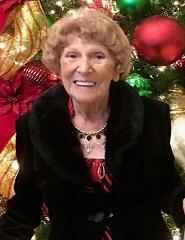 Lucille married her skating rink partner, Richard E. Richardson, in Worcester, MA in 1949. The couple welcomed three daughters who remember their mom with all the love and respect in the world.

Lucille had an impressive career as a Legal Secretary and Office Manager for Liberty Mutual, having been called back out of retirement to continue her much valued legacy. Lucille and Richard permanently retired to Palm Bay, FL in 1990 at which time they became accomplished ball room dancers. She was elected President of the Ladies Auxiliary in 1997 at the same time that Richard was elected as Exalted Ruler, at Elks Lodge #1744 in Melbourne, FL.

Lucille was always the life of the party and very social. She was a generous, intelligent, and dedicated woman whose wit, sense of humor, and upbeat outlook on life charmed everyone around her, up until her final moments, according to those who cared for her.

She is preceded in death by her husband Richard, who died in June 2018; her sisters Theresa Welch and Joan Jones; her brother Hector J. Vandal, Jr; and her grandson Jeffrey Cullina, who lost his 8 year battle with brain cancer in 2013 at the age of 37. She is survived by her brother Norman Vandal of Shrewsbury MA; her three daughters, Cheryl Cullina, Karen Richardson, Nancy Richardson; son-in-law William Cullina; 4 grandchildren Michael (Charlotte), James (Lauren), Jonathan (Luis), Josephine (Bryan); and 8 great grandchildren Quincy, Corrinne, Andrew, Jackson, Connor, Holly, Colton, and Emily.

Lucille will forever remain with her departed family at Worcester County Memorial Park in Paxton, MA.

On line condolences are invite and maybe sent to: www.brunswickfuneralservice.com.