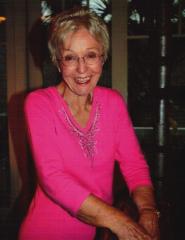 Rae was born in Horry County near Loris, SC in 1930. She grew up on a farm with no electricity and no indoor running water. She graduated from Loris High School in 1947 and went to Columbia Business School in Columbia, SC where she met her first husband George A. Sloane Jr. They married in 1949 and shortly thereafter moved to Ocean Isle Beach in June of 1955 becoming the first permanent residents of the island for 15 years. She and her husband George started Sloane Realty, selling real estate and renting beach cottages on Ocean Isle Beach. They built the Ocean Isle Motel (now Ocean Isle Inn) in 1959. They worked together growing these businesses until George’s untimely death in 1971 in a car accident. Rae trained her teenage children to assist her in running the family business after his death. Several years later, she met and married Conner F. Cox from Guideway, NC and embraced his two children, Steve and Kerry Cox, as her own. Her second husband Connor passed away in 2008.

She was always very active in her community and a member of Bethel Primitive Baptist Church in Calabash, NC. She was the first Town Clerk for the Town of Ocean Isle Beach. She was a founding member of the South Brunswick Island Chamber of Commerce. Rae supported the South Brunswick Island Committee of 100 by donating land to begin the Park on NC 130. She was honored by the vacation rental industry as a recipient of the Vacation Rental Women Pioneer Award at the Vacation Rental Managers Intel Women's Summit in New Orleans, LA. She was named a “Remarkable Woman of Brunswick County” by the NC Senate. She was a very generous person and assisted many people in need, almost always anonymously.

Rae’s hobby was traveling. She travelled extensively with her children, grandchildren, brothers and sisters, and close friends.

In lieu of flowers, please send remembrances to the Habitat for Humanity, Hope Harbor Home, or Bethel Primitive Baptist Church.

Funeral services will be held Sunday, August 28th, 2022 at Brunswick Funeral Service, Shallotte, NC. Visitation will be at 1:00 p.m. and the Funeral Service will follow at 2:00 p.m.