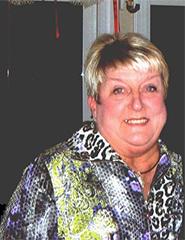 It is with great sadness that we pass along to you the news of longtime resident, Barbara Boozer, affectionately known as BB or Beebs, passing on June 15th, 2019.

Originally from Staten Island, Barbara and Bill traveled the world on military assignments, until they retired and moved to St. James in 1997. Beebs was an inspiration and leader in St. James' infancy, arriving here when there were only 350 residents. She quickly saw the needs and was always there to fill the needs

She oversaw the entire 1st and 2nd Founders Day and Parade, writing the blueprint for the celebrations we continue to this day. She served on the Fire Department Board and also served several years as the chairmen of the POA nominating Committee. She was an active member of the Service Club for many years as well as heading up the Activities Committee.

Barbara was an accomplished cook, loved parties and entertaining. She began and was responsible for the party planning on Irwin Drive for many years.

She was a strong, kind, and dynamic leader...a force always on a mission. If I were to write the history of St. James, it would not be complete without the contributions of Barbara Boozer. She truly loved St. James, the community and everyone in it, and is so proud of what it has become. On this 20th Anniversary of the town St James, Barbara Boozer cannot be forgotten or replaced ... she will be greatly missed.

Funeral services will be held at Sacred Heart Catholic Church on Thursday, June 20 at 11am followed by a reception at the Reserve Club at St. James. Burial will be in Arlington Cemetery at a later date

As Barbara was a breast cancer survivor, in lieu of flowers, the family is asking that donations be made in her name to the Susan G. Komen Breast Cancer Foundation

Barbara is survived by Bill, her husband of 56 years, her daughter Wendy (and husband Dan) Lemieux, and her grandchildren Alex and Sami.