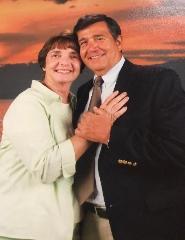 Barbara Rae Collins Lidoski, age 72, a resident of St James since 1999 passed away on November 13, 2019, at the SECU Hospice House of Brunswick - Lower Cape Fear Hospice surrounded by her loving family after a courageous battle of cancer and respiratory illness.

Barbara was born on October 9, 1947 in Boston MA to the late Raymond and Katherine Rohan Collins. She is also preceded by her beloved husband, Joseph Francis Lidoski, Sr. and son, Robert Lidoski, Sr.

Barbara was dearly loved by her family and friends. She had a marvelous zest for life, great sense of humor and never met a stranger. She was a role model to many for her positive attitude, especially as she coped with her illness bravely for 7 years,

She graduated from St Vincent’s Nursing School, in Jacksonville Florida and worked for many years as an RN in Florida. After she married Joe she moved to Clinton NJ, where she pursued another successful career as a realtor for Weichert.  Barbara was all about doing for others and giving back to the community. She was dedicated at volunteering for many years at New Hope Clinic for people who do not have medical insurance. She was the director of volunteers at the clinic and supervised nurses and EMTs one evening per week. She was selected to receive the Governor’s Medallion Award in 2011, an honor given to the top 20 volunteers in North Carolina.

Barbara loved music and dancing. she especially loved to line dance and the favorite southern dance called “Shag”. Barbara and her husband taught Shag dancing to many people in St. James and Oak Island. She was a die-hard Miami Dolphin fan and always the life of the party. She will be greatly missed by her loving family and wonderful friends.

A funeral Mass will be held on Saturday, November 16 11:00 am at Sacred Heart Catholic Church, Southport, NC.

Private on line condolences may be sent to: www.brunswickfuneralservice.com.