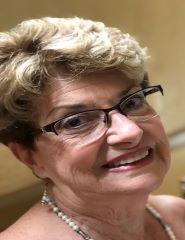 Barbara Ellenberger was born in Toledo, OH to Roger and Vera Tornow on October 18, 1944 and died on December 26, 2021. Her first marriage was to Ronald Lee Colwell who was killed in Vietnam in September 1968. Their daughter Kristin Colwell Birdlebough was born in January 1969. Barbara was married to James Ellenberger for 51 years. In addition to her daughter Kristin and son-in-law William in Salem, VA, she leaves her son, Justin and his wife Christine in Jacksonville, FL. She leaves five grandchildren; Kendall, Lilly, Lucas, Jeb and Sophie and numerous cousins, nieces and nephews from coast to coast and as far away as Australia. She is also survived by her sisters Cindy Maxon in Sterling Heights, MI and Patty Varwig in Sunset Beach, NC.

Barbara graduated from the University of Toledo and earned her Masters in Reading from San Francisco State University. She taught for many years at Wolftrap Elementary School in Vienna, VA. She and Jim moved to Ocean Ridge in 2011 – a community with friends that Barbara adored. She was very active in her community, serving on its Social Committee and on the Board of Directors of Ocean Ridge Charities Association (ORCA) including several years as President. ORCA has helped raise and donate over $1.1 million to needy organizations in Brunswick County since 2011.

She was an active member of St. Luke’s Lutheran Church in Shallotte. Donations in her memory are invited to both ORCA and the Brunswick facility of the Lower Cape Fear LifeCare Hospice in Bolivia, NC.