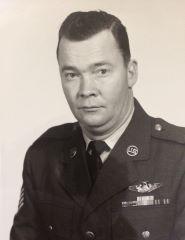 In 1956 he married Anna McPherson in Blanchester Ohio. He was a retired veteran of the US Air Force, where he earned several medals, including the Bronze Star. He served 20 years as a flight engineer and crew chief, seeing action in Korea and Vietnam. He received several commendations for his dedication and bravery. The discipline and patriotism he learned in the Air Force never left him, as friends and family will attest. Post the military Bob continued to serve his country as a civilian employee at Wright Patterson Air Force base until he and Anna retired to Sunset Beach, NC

Mr. Spivey is survived by his wife, Anna, his son: Michael and daughter-in-law Vicki, his dear cousin Margret Price Branche and many members of the Ford, Thompson and Price families. Bob was preceded in death by his parents Daniel and Bessie Mae (Thompson) brothers, Daniel (Cody), Daniel (Bud), Angus, and John Milton

A graveside Family Service will be held at Brunswick Memorial Gardens in Shallotte, NC on Wednesday, November 11, 2020, at 11:00 AM. The family is asking that in lieu of flowers, donations be made to: Disabled American Veteran’s at https://secure.DAV.org