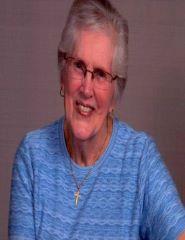 Born in Thetford, VT on August 26, 1933, she was a daughter of the late Willis Pearl Fenoff and Gladys Sterry Fenoff. In addition to her parents, she was preceded in death by her husband, Leo Hickey and a son, David Hickey.

She was an active member of St. Stephens Episcopal Church and a retired public school secretary.