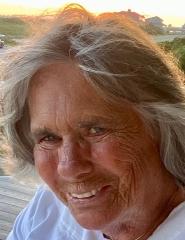 CarolAnn grew up in Jamaica Estates, NY as the oldest of three girls who were doted on by their parents. She graduated from Gwynedd-Mercy College and embarked on a long and impressive nursing career. She met Dan in NYC and they married in 1968. They moved to Fort Ord, CA for Dan’s military assignment and soon gave birth to their first child, Eric. The next year Dan started his tour in Vietnam and CarolAnn and Eric went back to NYC to be with family and continue her career at Columbia Presbyterian Hospital. When Dan returned, they welcomed daughter Kristin and Carol took a brief hiatus from Columbia and worked at CBS television studios as a studio nurse.

CarolAnn and Dan settled in Little Falls, NJ in 1973 and began acquiring their wonderful group of lifelong friends. CarolAnn was a fabulous hostess, and no one will forget the St. Patrick’s Day parties, the Christmas Eve feasts, and, quite frankly, any dinner party she threw. She continued nursing part-time and was active in the Little Falls Women’s Club. Peter, their third child, joined the fun in 1977 and all three children have kept CarolAnn on her toes since.

She loved gardening, traveling, and anything that involved sunshine. She loved spending summers on the Jersey Shore welcoming the many friends her kids would bring with them. As long as she didn’t whip up her tuna noodle surprise casserole, they all loved sitting down to dinner each night and sharing their seaside adventures.

CarolAnn was a brilliant nurse and contributed so much of herself to each and every shift. She started as a floor nurse and worked her way up to the heart/lung transplant unit by the end of her career. One of her favorite accomplishments was bringing transplant patients on a “field trip” for fresh air. These patients spent months in the hospital with no access to the outside. She always talked fondly about the field trip she coordinated and how happy her patients were to breathe some real air!

By far her biggest love, however, was being Grandma to her five grandchildren. She loved them beyond words and was happy to share in some mischief with them whatever chance she had. She always spoiled them and showed up for every event in their lives, big or small. We know Charlie greeted her in Heaven when she arrived, and we are confident the two of them are already making mischief together.

CarolAnn and Dan moved to Southport, NC in 2014 for their retirement years and immediately began building another wonderful community of friends. They celebrated 53 years of marriage in March of this year.

Funeral arrangements are as follows:

In lieu of flowers, donations in memory of CarolAnn can be sent to