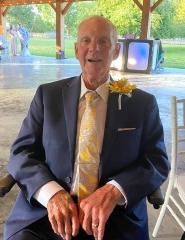 A beacon to his family Charles “Bud” Carl Ficke Jr. passed away on September 4, 2022. He was born to Helen and Charles Ficke of Baltimore , MD on March 13, 1946. Bud was a Marine Corp Veteran serving in 1964. He then moved to Calvert County Maryland to begin his career at Calvert Cliffs Nuclear Power Plant in the Radiation Protection unit. After 27 years, he retired, moving to Calabash, North Carolina to live out his remaining years .

He married the love of his life, Barbara Senft on November 26, 1966. They had 2 children Brian and Brandy. He is preceded by death of his wife who passed in 2016, just 9 months prior to their 50th wedding anniversary.

Bud loved being outdoors as much as possible, fishing, cooking crabs and grilling at cookouts. Bud was a people person and made a new friend everywhere he went.

Bud was always ready and willing to help his family and friends and will always be remember as a great Dad, a great Paw-Paw and a great friend.

A Memorial Service will be held at St. Leonard Firehouse on October 2nd.