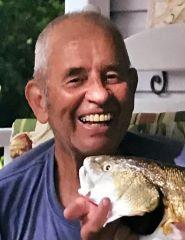 He was born in Belding, MI on July 4, 1933 a son of the late Charles Ora Spencer and Willema Hill Spencer. In addition to his parents he was predeceased by a brother, James Spencer.

He was a retired US Air Force veteran and formerly a charter boat captain as well as a master gardener.

Charles was born in Belding, Michigan while on a family fishing trip & then raised in Indiana. His love of fishing & gardening was a lifelong passion his entire life. He left us while gazing at a beautiful garden thru the french doors at Cape Fear LifeCare.

After retiring from the Air Force he taught at Sumter Area Tech College. He then studied & earned his Charter Boat Captain’s license. He retired from fishing & then embarked on his Brunswick County Master Gardener service, graduating from the 1st class, serving as President, & teaching future instructors. He wrote gardening articles for several local newspapers for decades.

In later years he enjoyed NASCAR with his son Charles Arthur until he could no longer navigate the track stairs. His love of gardening was passed onto his daughter Erin, a landscape architect who started her career in this area.

In 1957 he married Mary Louella Rosemond of El Paso, Texas. While serving in Vietnam they met in Hawaii for some R&R & that was the start of their travel adventures. They saw the world together & enjoyed 64 years & 5 months of life & love.

He was a wonderful husband & father. He is survived by many Rosemond nieces & nephews. Donations may be made to Cape Fear LifeCare Hospice or any local animal shelter.

There will be no local service at this time.

Online condolences may be sent to the family at www.brunswickfuneralservice.com.