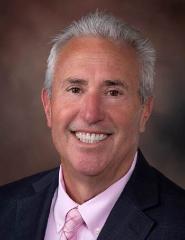 Born on June 30th 1961, in Clearwater, Florida, he was the son of the late Dries and Rosemary Vandenberg, brother of John Vandenberg, Joan Philipp, Anthony Vandenberg, Patricia Bonatis, Kathleen, Timothy, and the late Christine Vandenberg.

David married the love of his life, Amy, on November 28th, 1987, at St. Mary Margaret Mary Catholic Church in Winter Park, Florida. Once a favorite vacation destination, David and Amy relocated to Ocean Isle Beach to live in his dream home in the summer of 2018. He was a devout Catholic, and he and Amy were parishioners at St. Brendan the Navigator in Shallotte.

David graduated from Belmont Abbey College in 1984. He rose through the ranks in the college food service industry, moving across the Southeast until reaching Aramark, a company that he grew with for the last 30 years. David never missed an opportunity to share how the great employees of Aramark made it a successful company. He is remembered saying, “at the end of the day, it’s people serving food to people.” David was a Vice President in Higher Education at the time of his death.

David is survived by his wife Amy, his three children: son Andrew of Charlotte, NC; son and daughter-in-law, Adam and Marissa of Charlotte, NC; daughter Melanie of Ocean Isle Beach, NC; and his granddaughter Alice. He will be remembered as a loving husband, devoted father and brother, and helpful friend and neighbor.

A funeral Mass will be offered at St. Brendan the Navigator Catholic Church in Ocean Isle Beach on Friday, September 2, at 10am.

In lieu of flowers and given David’s long career in food service, the family requests donations be made in his name to St. Brendan the Navigator Catholic Church Loaves and Fishes.