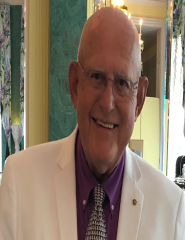 He was the son of Louise Josephine “Louie Jo” Arnold Newkirk Godfrey also of Keyser, and Grandson of David “Uncle Dave” Arnold of Knobley Farm.

Dave, as he liked to be called, was a resident of Mineral County until 1969. He was a graduate of Keyser High School, Class of 1964, and joined the U.S. Air Force where he served as an Air Traffic Controller. He was a Veteran of Vietnam, an Air Force Commendation Medal recipient for Meritorious Service, and received an Honorable Discharge in 1968. He was a member of the River’s Edge Veterans Association and a 32nd Degree Mason.

He returned to Keyser where he met and married Shirley Kay Arnold, daughter of Harlton W. Arnold of Elk Garden, and Elva Kathleen Shoemaker of New Creek, WV.

Dave had been hired by the Federal Aviation Administration as an Air Traffic Controller shortly after his discharge from the Air Force and he served thirty-seven years in that capacity, retiring in 2006. His assignments were mostly in the Washington, D.C. area except for two years teaching Air Traffic Control in Oklahoma City. In 1979, he and Shirley returned to Virginia.

Dave and Shirley lived in Warrenton, VA for thirty years and had two daughters. The youngest daughter April Lynn died in 1993 and is survived by her sister Dawn Michelle Arnold of Pawleys Island, SC. Dave and Shirley have two granddaughters, Kaylynn Marie who is currently attending NC State, and Ava Christine who is a Junior in High School in Pawleys Island.

In 2012, Dave and Shirley moved to Rivers Edge in Shallotte, NC where they built their retirement home in 2013.

A Celebration of Life will be conducted Tuesday, November 19, 2019 at 2:00 pm in the chapel of Brunswick Funeral Service with military honors.

A second service will be conducted in Warrenton, VA at a time to be announced under the direction of Moser Funeral Home, Warrenton, VA.