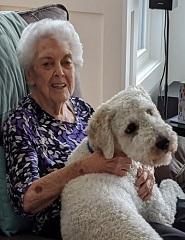 She was the widow of James F Wallace and a resident of Coastal Pointe for 10 months. Dolores was born in Baltimore, MD on January 21, 1927 and raised her family in Mt Airy, MD where she and her husband, Wally, were the founders of Wally's Iron Works. They later retired to Winter Haven, FL and in 2015 she relocated to the Carolina's to be closer to her daughter.

There will be a private internment ceremony in Bushnell National Cemetery where she will be buried next to her husband.