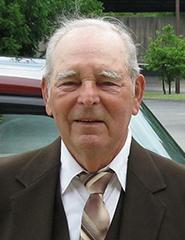 Donald M. Harrison, 90, of Monaca, PA passed away peacefully in his sleep on February 20, 2017 from an illness he fought for over 2 years.

Born February 19, 1927 in Green County, Cumberland Twp., PA, he was the son of William Howard and Lavina Pearl (Firestone) Harrison.

Donald was preceded in death by his beloved wife of over 52 years, Dorothy Theresa (Meyers) Harrison on November 17, 2000. Donald is the last surviving member of his family and was preceded in death by three brothers, William Jr. (Whitey) and Vernon, both of New Brighton and Robert Lee (surviving wife Joan) of Bennettsville, SC, and one sister, Norma Jean Holsinger of New Brighton. .

Surviving children are Edward Charles Harrison (and friend Sandy Cardamon) of Monaca and LaVerne Catherine (Bruce) Shearer of Beaver, PA. He had a special place in his heart for his Grandchildren Timothy B. (Shannon) Shearer of Beaver, PA and Bradley C. Shearer (Jamie Cavallaro) of Ellwood City, PA and Krista Harrison of Beaver Falls and Great Grandchildren Jacob Bruce, Emma Jane Shearer and Bailey Nicole Burgess, along with numerous nieces and nephews who he also loved.

He was retired from Westinghouse Electric Corporation in Vanport, PA. He was loved by all who knew him for his gentle ways and good heart. He loved his Grandchildren as if they were his own and adored his Great Grandchildren. He was a good friend and neighbor and would do anything for anybody in need. Serving in the Navy during World War II as a Signalman on board the U.S.S. Dale, he often liked to tell the story of being in a Typhoon and seeing other ships sinking that were in their convoy. He loved fishing and in later years golfing. Mostly he just loved the simple life and visiting his friends and family, of which he had many.

We would like to give special thanks to the Hospice nurses and attendants who did a wonderful job taking care of Dad. Also special thanks to Dawn Giovannelli for her continued help and support. Dad had many good friends and family who were always there for him and provided assistance including Charlie and Judy Carpenter, Joan Harrison, Linda Luketic and Jack and Sis Howe. He will be sadly missed by all who knew him.

Arrangements are being handled by Brunswick Funeral Service, 5229 Ocean Highway West, Shallotte, NC. There will be no visitation or funeral services, per Donald’s last wishes.