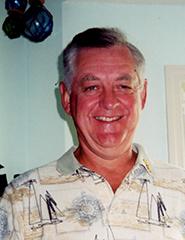 Douglas Richard Groves entered into rest on July 24, 2019 after a brief illness in Grand Strand Hospital. Doug was born and raised in Newburg, New York. He was employed by IBM in Fishkill, NY until his retirement in 1993. In 1994 he and his wife Mary L. moved to North Carolina and built their home in Brunswick Plantation, Calabash, NC. He made his home here until his passing.

Doug was an avid sports enthusiast loving all sports. He was a Referee in his earlier years in New York until his retirement. He officiated basketball games for NCAA, College, Wheelchair, and many other organizations. Upon retirement to North Carolina, he continued to officiate Girls High School Basketball in several counties and also in South Carolina. He reluctantly retired his whistle when his “knees” had finally said enough and he had 50 plus years under his belt. He was also an avid golfer and played golf for fifty plus years. He was a lifetime member of Elks. He enjoyed living on the golf course at the second hole in Brunswick Plantation and playing with the other members and meeting new people.

He kept active to the end with different part-time jobs over the years to keep busy and most recently at Home Depot in North Myrtle Beach as the “Greeter.” He liked keeping active and enjoyed talking to customers and other employees. It was the perfect job for him with his natural gift of meeting and talking to people, his “story telling” and helpful personality.