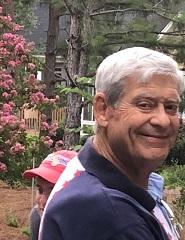 Dwight was born February 25, 1940, in Wichita Kansas to the late Harold and LaVerne Leimer. He was raised in St. Louis, Missouri, with his two surviving siblings; sister Beverly Branneky and brother, Steve Leimer.

Dwight attended Valparaiso University before serving in the Air National Guard. He met his wife, Patti, in Toledo, Ohio, where they started their family and careers. Dwight was a retired executive at Ohio Bell, in Dayton and Jay Instruments, in Cincinnati. He had a love for tennis and was able to channel this by managing tennis centers and racket clubs in Dayton, Ohio, while staying active playing tennis throughout his life. Dwight and Patti moved to St. James Plantation in 1998. Oak Island was a long-time vacation spot for their family. Dwight enjoyed his retirement years spending time with his family, especially his grandchildren. He was a guiding force in their lives.

He was survived by his wife, Patti Leimer, of 51 years; his son, Corey Leimer (Priya); his daughter, Amy Wallace (Jason); “Papa” will be missed by his grandchildren, Aiden Wallace, Mikayla Leimer, Maya Wallace, Lilly Wallace, Sophia Leimer, and Kaelin Leimer. He is also survived by his sister Beverly Branney and Steve (Jan) Leimer.

A Celebration of Life service will be held on Saturday, October 5, at 9:30 am at Brunswick Funeral Home, 3479 Southport Supply Road.

The family suggests memorial donations to be made to St. Jude Children's Research Hospital.

Private on line condolences may be sent to: www.brunswickfuneralservice.com.