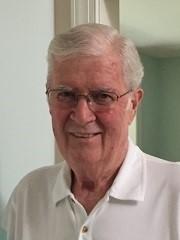 Edward C. Malone, 84, Calabash, NC, died an untimely but peacefully death on November 11, 2021. Born on July 12, 1937 In Philadelphia, PA to Edward W. & Henrietta Cahill Malone Hogan and he moved to NJ as a boy. He attended Camden Catholic and Merchantville High Schools, was received into the New Jersey Army National Guard and served full-time till 1962. Ed attended and graduated from the Massachusetts Worcester Polytechnic Institute SIM Class of 1983 with a degree in Industrial Management.

His family knew Ed only as a devoted, caring, kind husband, father, grandfather, and great-grandfather. Ed lived a full life, shared with his wife, Judith, and was full of entertaining stories and had such a great sense of humor. He loved to read and his favorite author was W.E.B. Griffin, reading all of his 7 series of books. Ed had a great love of life and a firm understanding of what was important – the simplicity of living a life with those you love.

Ed was a member of the Calabash Covenant Presbyterian Church, Sunset Beach, NC.

Ed enjoyed following professional baseball and football teams, playing golf, coaching his sons’ ice-hockey traveling teams, and being a coach for their little league baseball teams. He had a great love for Mustangs, owning a 2007 Shelby GT, and being the original owner of a classic 1967 Mustang convertible which he has had to this day. He was an active car club member for many years when Judy and Ed lived in MA, PA, and NC. His professional career was in Computer Service Management where he traveled extensively worldwide with experiences others only dreamed about. With an early retirement, and a move to Calabash, NC, Ed became a Broker, Realtor for Coldwell Banker, Sloane Realty, Sunset Beach, NC, and remained active with them till his passing.

Arrangements were made through Brunswick Funeral Service, Shallotte, NC, where private services were held.