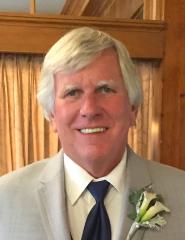 Ed W. Casey, 66, of Carolina Shores, NC died Friday, June 5, 2020, from a one and one-half year fight with brain cancer. He was born on November 14, 1953 in Elkhart, Indiana, to the late Martha Ann (Cupp) Casey and Curtis Leon Casey. He was also preceded in death by his brother Butch Casey. He married Donna Morrilly on October 10, 2015 in Ocean Isle Beach, NC.

Ed graduated from Elkhart High School in 1972. He lived in Casco, Maine for many years where he raised his two sons. Ed retired from Texas Instruments in South Portland, Maine in February 2015, before moving to North Carolina.

As a proud parent, Ed was extremely supportive and passionate for his sons’ sporting events and could always be seen on the sidelines cheering them on. Ed spent a lot of time with his family on Moosehead Lake in Maine where they had a summer cabin.

Ed had a passion for wood working. He enjoyed making handcrafted one-of-a-kind frames from high quality reclaimed wood. Ed also loved to travel, including a month long cross country road trip with his wife Donna in the fall of 2017.  He enjoyed spending time with family, golfing, kayaking, and listening to James Taylor’s music.

A celebration of life will be held with close friends and family in Carolina Shores, at a date to be determined, and in Maine at a later date.

Online condolences can be made at www.brunswickfuneralservice.com