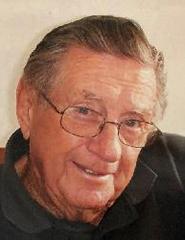 Elwin W. Mates, aka “Bill” and “Pop”, 90, of Calabash, passed away peacefully on September 2, 2019 at Hospice in Bolivia after a short illness. He was born May 23, 1923 at home in St Albans New York. He was the son of the late Elwin M. Mates and Helen Sheehan.

Bill enlisted in the U.S. Merchant Marine at 16 years of age and served in World War II. After the war, he joined the NY National Guard 165th Division until he was honorably discharged as a corporal in 1952.

He married Joan Marie Mellon on February 18, 1950 and they raised their three children in North Massapequa, Long Island until his retirement and relocation to Calabash, NC in 1991. Bill was a building construction plumber in Plumbers Local Union #200 in Nassau County NY.  He worked on many sky scrapers including the Twin Towers in New York City and buildings on Long Island. He was an active father and committed family man. All his free time was spent coaching, attending his children’s events or vacationing with family. He was very close to his two sisters and their children and grandchildren and all holidays and celebrations were typically spent together. He was fortunate to have had two large family gatherings at Sunset Beach this summer where he laughed and swam with his grandchildren and great grandchildren. Bill had an easy way with people and was able to talk to anyone. He was renown within the extended family for being able to tell a story with ease that kept everybody in stitches. He loved every minute of his retirement in Calabash playing golf, visiting with family, and gathering with friends and family at the Calabash Elks Lodge where he was an active member of the Veterans Affairs Committee.

Bill was preceded in death by his wife Joan, his parents, and his sisters Gladys Davis and Vivian Lacetera. He is survived by his children Carol Corbett (John) of Sunset Beach, Thomas Mates (Kaia) of Currie NC, and Bill Mates (Barbara) of Midlothian VA. He is  also survived by grandchildren Amy Corbett ( Nathan) of Boston MA, Sean Corbett (Lindsey) of Carolina Beach NC, Caitlin Mates (Chris) of Honolulu HI, Hadley Berting (Josh) of Washington NC, Walker Mates of Steamboat Springs CO, Scott Mates (Juliet) of Henrico VA, Christopher LaRocca (Nicole) of Chesapeake VA, and Megan LaRocca (Joe) of Farmingville NY. He is also survived by 10 great grandchildren, as well as nephews, nieces and their children, most of whom he played on the beach with this summer.

A funeral service will be held at Brunswick Funeral Service in Shallotte on Monday, September 9; the viewing will be at 10:00 AM, followed by a service at 11:00 AM and internment.

Private on line condolences may be sent to:  www. Brunswickfuneralservice.com.