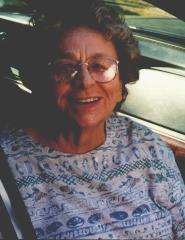 Esther LaRue Smith, 94, of Shallotte died peacefully December 6, 2019. She was born July 14, 1925, in Columbus County, NC, a daughter of the late Carl Hobert Ward and Jewell Ross Ward. Esther graduated from Whiteville High School and earned a Bachelor’s of Nursing from Queens College in Charlotte. Esther began her nursing career working with Drs. Sadler and Wyche in Whiteville, NC. Her passion for nursing was evident in her selfless service to her community. She was a pioneer for what is now known as a home health nurse.

Esther was an active member of Happy Home Baptist Church serving in whatever capacity was needed. She had a heart for foreign missions and supported them through WMU.

Esther’s biggest challenge, but her greatest accomplishment, was raising six girls on a busy tobacco farm. She made sure her daughters developed a love for music and education, but most importantly was having a relationship with Jesus Christ. Her daughters learned by her example. She was a great Christian witness who loved to serve others.

Family and friends will celebrate Esther’s life at 11:00 AM, Monday, December 9, 2019, at Happy Home Baptist Church. Burial will be the church cemetery. The family will receive friends at 10:00 AM at the church.