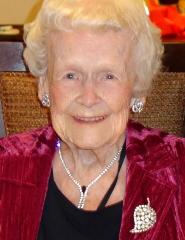 Florence Catherine Milligan peacefully joined her husband in heaven Tuesday April 19, 2022 at 12:06 pm. Born to Mary and Michael O’Shea in Queens, New York on October 11, 1924, Flo lived a long and happy life of 97 years as 1 of 14 siblings who preceded her in death.

At the beginning of WWII when most of the male population had joined the military and was off to fight the war, Flo also wanted to serve her country. Taking a position as a “Rosie the Riveter,” she operated a drill press making munitions. It was about this time that Flo carved out time to also meet a man in uniform who would become the love of her life. Irvin Bailey Milligan was a Chief in the US Navy anchored for a time in New York City.

Irvin was obviously very persuasive. He convinced a New York City girl to abandon the “Big Apple” to move to Ash, North Carolina 77 years ago when more roads were likely dirt instead of paved. Flo immediately fell in love with Irvin’s 12 brothers and sisters and respective spouses who instantly became family.

Flo was an individual who never met a stranger. She always had a genuine smile and strong interest to get better acquainted with everyone she met. While living in Ash Flo became an active member of Soldier Bay Baptist Church growing her relationship with the Lord.

As Flo and Irvin aged it became apparent their physical well-being would be better served moving to the Raleigh-Durham area where their only daughter Hedy Caldwell and husband Lanny Caldwell could supervise their medical care. In 2009, Flo and Irvin moved to Heartfield’s Cary facility but decided Durham’s Atria was more suited to their needs. Flo was actively involved in Bible Studies (including Shabbot Shalohm which simply means an inner completeness or wholeness), Cooking, Flower Arranging, Painting, Exercise, and was a consistent Bingo Champion.

Missing Irvin who passed in 2011, Flo turned her attention to the love of people, dogs, and a whole lot of Chocolate! Her last three years were enjoyed at Brighton Gardens of Raleigh so she could be closer to Hedy and Lanny. While there Flo endeared herself to the friends she made and the staff praised her as the “sweetest person on earth.”

Flo forever lives in all our hearts.