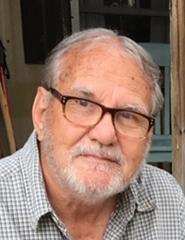 He attended Lilesville High School and graduated from Central High School in Charlotte, NC on June 1, 1956. Floyd served in the U.S. Air Force and enjoyed his time while stationed in Alaska. He retired from Duo-Fast Carolinas, Inc. with 35 years of service, where he made many friends along the way.

Floyd was often heard saying, "When it comes right down to it, it's just one of those things!" He loved the simple things in life such as breakfast at Big Nell's, relaxing on the porch, and spending time exploring the local antique and thrift stores. Floyd was known for his generosity, being fiercely independent, and his love of spending time with those closest to him. His greatest treasure in life was his family.

His children and grandchildren will always remember PaPa Bub for his Sperry's, love of vintage trailers and cars, beachcombing for anything but shells, ability to tell the best stories, collection of porch brooms, and pockets full of quarters.

In lieu of a service, PaPa Bub would want friends and family to spend time with those that mean the most to them.

"We are all travelers. From birth until death we travel between the eternities. May these days be pleasant for you, profitable for society, helpful for those you meet and a joy to those who know and love you best."