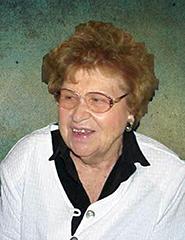 She and her husband owned and operated D. C. Russ General Store in Shallotte for many years. She was a Sunday school teacher for many years at Camp United Methodist Church where she was the oldest member. She was a retired teacher assistant with the Brunswick County school system. Also, she was a member of The Eastern Star for many years.

Funeral services will be conducted at 3:00 PM, Sunday, February 12, from Camp United Methodist Church by The Rev. Richard Vaughan. Interment will follow in Brooks Cemetery. The family will receive friends one hour prior to the service at the Church.