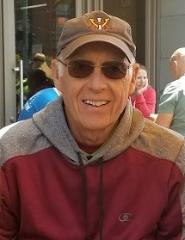 Born in Clifton Forge, VA on April 29, 1943, he was a son of the late Orville Carlton Paynter and Bernice Franklin Putnam Paynter.

He was a graduate of Virginia Military Institute '65 and was a veteran of the U.S. Army with the rank of 1st Lieutenant. He spent a career working in HVAC wholesale management and developed life-long friendships with his customers and co-workers from Lyon & Conklin Inc.

Greg, (Daddy, Pop-Pop, Poppa Slurf, Slick, The Original), will be forever remembered for his generous heart, animated story-telling, his moves on the dance floor and of course his golf game.

Anyone who was lucky enough to spend time with him will never forget his ability to tell the best stories where he laughed at all his jokes.

His laughter still rings in our hearts.

Serices will be conducted in Buena Vista, VA at a later date.