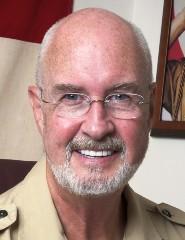 His parents were avid racquet sports enthusiasts; a passion Hal continued throughout his life while playing tennis, squash, badminton, racquet ball, and pickle ball. Hal spent his career in marketing research in NYC, Cleveland, Chicago, and Los Angeles serving national and international clients. He loved this work, and finished his last project this June for long time client Winchester. Hal was a fervent supporter of Boy Scouts of America and Rotary International. He was a third generation Mason. Hal loved to sing, lending his voice to various choirs and musical groups throughout his life, including The Creeksiders and Coastal Harmonizers.

His proudest public accomplishments were serving as a Badminton Court Official at the 1996 Olympics in Atlanta, serving as a Rotary International Governor for District 7510 in 2015-16, writing the "Ask Andy" advice column for 21 years for the US Scouting Service Project, and receiving the Distinguished Eagle Scout Award for achieving national level prominence in marketing research.

A celebration of Hal's life will be held on Saturday, December 10, 2022 @ 1pm at the Arbor Creek Clubhouse in Southport, NC, followed by a reception.

In lieu of flowers, donations may be made in Hal's memory: