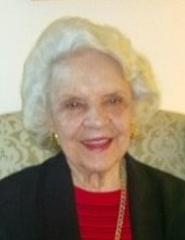 She was born Helen Margaret Vlasich in Ironwood, MI on May 30, 1920 and lived most of her adult life in her much-loved Chicago, IL as Mrs. Ladislaw (Larry) Gross.  She died on November 30, 2019 just shy of her 100th birthday, in Southport, NC (which she smilingly called “a one-horse town”) and where she reluctantly moved at age 92 to be near her only daughter Susan and son-in-law Bill Edwards.

She had re-christened herself “Jill” as a teenager just because she liked the name better.  She had a happy childhood with her chiropractor father Stephan, her mother Anna, and her sisters Kay and Anne and brothers Steve and Hank.  Tragedy struck on Christmas Day in 1941 when Stephan died suddenly leaving the young family to pull together in some tough post-Depression times.  They were all raised to be proud of their Croatian heritage, and Jill honored her roots by becoming a life-long member and officer of her local Croatian Fraternal Union lodge in Chicago.

She began her career as a secretary right out of high school and met her future husband at her first job.  She continued to work after marriage and the birth of her daughter (making her a little ahead of her time) because she loved the work and the independence.  Although she never drove a car, she loved to travel; shop downtown Chicago virtually every Saturday (favoring jewelry, hats, shoes and purses); go to movies; and get together with family and friends.  She loved to entertain in style using her excellent cooking and baking skills; decorate her home (especially with wallpaper); write long notes and letters; read newspapers, magazines and books (mostly celebrity biographies); and talk on the phone – a lot.

She became a young widow in 1974 but loved watching her only grandson Christopher grow up, spoiling him every chance she got.  She was happy to see him marry Jennifer in 2006 and thrilled when great-grandsons Mason and Jackson arrived a few years later.  She loved for them to visit Southport so she could see their smiling faces and offer them her favorite candy – Hershey’s Kisses.

After her retirement she took in her own widowed mother, caring for her until she died at age 95. With her own health declining, she arrived in Southport living first at Carillon (assisted living) and later at Southport/Ocean Trail (skilled nursing) where she received excellent care from both staffs.  She also treasured her contacts with her doting nieces Carol, Janet and Joan and nephews Dan and Dave.

While her last few years were more of a struggle, she never complained and never lost her smile.  Her favorite refrigerator magnet read “Old age ain’t for sissies”, and she proved she wasn’t a sissy right to the end.  If you want to honor Jill for a life well-lived, don’t write a check.  Instead she would want you to vote for a Democrat in The White House in the 2020 election.

There will be no local service, but interment will take place in IL at a future date.