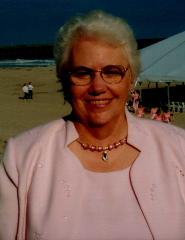 Helen ("Topsy" to all who knew her) Skinner passed away Tuesday Jan 11th in Shallotte NC, from end stage vascular dementia. Topsy is survived by son James Stanton “Stan” Skinner of Durham, daughter Laura-Leigh and husband Stephen E. Rowlette and granddaughters Savannah Ray and Sydney Eileen Rowlette all of Wake Forest, sisters Polly and husband W.T. “Rusty” Russ Jr of Shallotte, and Patsy and husband John S. Ratterree of Charlotte, and brother James Brooks Greenwood III and wife Pam of Matthews, NC. She is also survived by a wealth of nieces and nephews and cousins whom she loved dearly. Topsy was preceded in death by former spouse Alton “Bud” Skinner III of Raleigh, and parents James Brooks Greenwood Jr and Eileen Stephens Greenwood of Charlotte, and niece Rebecca Jean Russ or Shallotte NC.

Topsy was a native of Charlotte where she graduated from East Mecklenburg High School in 1963 and then went on to study at Limestone College. She worked several part time jobs while raising her children and ended with a long career as an administrative assistant at the NC DOT. Her early loves were focused around her children, family and neighborhood friends. She played in several neighborhood bridge clubs and treasured large extended family summer trips to Ocean Isle Beach, trips to the family “river house” in Charlotte, and large family Christmas gatherings. She was an amazing mother, leading Brownie Troops, sewing costumes for school plays, attending horse shows and marching band competitions, and was an expert “soccer mom”. Her more recent years were spent as an amazing “Nana” to her granddaughters; babysitting, baking, doing crafts, playing card games, and helping with the most amazing birthday parties including making monumental birthday cakes. She also enjoyed many summer weekends on Falls Lake with her kids and granddaughters.

Anyone who knew Topsy was touched by her kindness, love, and generosity. She will be missed by all.

Donations can be made in Topsy's name to the Ronald McDonald House of Chapel Hill, 101 Old Mason Farm Rd, Chapel Hill, NC 27517