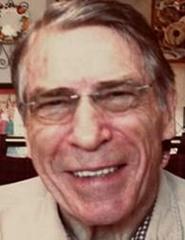 Ib Outzen Nicolaisen was born in September of 1924, and passed away on 08/31/2019 - just three weeks shy of his 95th birthday.  He loved automobiles and worked the majority of his life in the automotive industry.  He would always be buying and selling cars for the family, and he placed a priority on “low mileage” cars.  Well, in his life he ended with “high miles”.  He lived 34,679 days, which is just short of 3 Billion seconds and 50 million minutes!  How ironic.

He was born in Maribo, Denmark, the youngest of three brothers.  He was raised in the Old World way, with his father, Farlaise, being a strong patriarch figure.  At that time, the family business provided most of Europe with ‘Laise Coffee’.  He grew up during the Depression.  As he turned 16 years old, the Germans invaded Denmark.  He spent his teenage years under Nazi occupation, and was involved with the Resistance as a courier.  He had a love of automobiles and studied in the trade schools.

After the war, he held a strong belief that he wanted to forge his own life.  He wanted to move to America, and received preliminary acceptance into the General Motors Institute in Detroit, Michigan.  As he made his travel plans, the school closed and with it the opportunity to immigrate to the United States.  Undeterred, he pursued immigration leaving home with all his worldly positions in two suitcases and took a passage on a small Polish freighter to Canada in 1947.  He worked a variety of jobs, building himself up in a number of Canadian cities eventually arriving in Sarnia Ontario.  There he met his mate, Elizabeth Anne “Betty” Rabbitts, and was married for 66 years until his death.  He also adopted the moniker “Nick” as his first name, realizing that his given names of “Ib Outzen” was too difficult for the English tongues.

As newlyweds, the couple jumped at an opportunity for Nick to take a job in Detroit, Michigan working for a small chain of tire stores.  Working his way up to a manager position, the owner offered the opportunity to open a new store 120 miles west of Detroit in the mid-sized town of Battle Creek.  It became their home for the next 40 years.  He threw himself into the new business and it thrived.  A few years later, he bought out the owner and purchased “Market Tire” for himself.  For twenty years he prospered as a small business owner, first with the tire store and later as a Sunoco Service station franchisee.

Having planted roots, Nick and Betty began a family which would eventually become four boys.  Paul arrived in 1954; Pete in 1957; Tom in 1960; and Rick in 1961.  The growing family bought a duplex at 46 Latta Street in the city of Battle Creek, MI.   Living there until 1965 when they relocated to the rural township of Pennfield.  There Nick shaped his son’s lives with strong investments of time into Scouting (which yielded two Eagle Scouts), membership into the 4H Club & ownership of their very own horses.  Outside of the family, Nick also became active in the Optimist Club and Kiwanis public service organizations.  It was a tight family celebrating Danish traditions (especially Christmas Day).  All four boys held jobs as teenagers & the family sent Mom and Dad to Hawaii for their 25th wedding anniversary.

Nick’s sons all achieved student success pursing very different paths.  Paul became first chair trumpet in the high school band and the student council president.  Pete excelled in track and field and cross country receiving conference and All-City awards.  Tom also excelled in track / cross country and was a trombone player.  Rick, discovered a passion for football and became a starting offensive lineman on the high school team.  Later as adults, the four boys would continue on different paths:  Paul went on to work for multiple companies in business management; Pete moved to Florida & worked in Sales in the telecommunications industry; Tom moved to Houston Texas to run a trucking firm and work in logistics; Rick remained in Battle Creek, MI where he achieved two Journeyman certifications as a Brick Mason and in Sheet Metal fabrication.

In 1985, with the family all living elsewhere, Nick and Betty ‘retired’ to Cocoa Beach Florida.  When asked why he chose Florida, Nick would joke that he tied a snow shovel to the front of the car and in Cocoa Beach someone finally asked him what that was.  He figured that was a safe place to stay and escape the snow.  Betty had been one of the first female Real Estate brokers in Battle Creek, so once they arrived in Florida Nick earned his real estate license.  For the next +25 years they would work together in the real estate and rental market.

In 2014, having reached the age of 90 years of age, Nick finally gave into the family’s concerns of them living alone.  They moved to St James, North Carolina to live with their eldest son Paul and his wife DeAnna.  Nick’s final years were frustrating for him as he had always prided himself on being self-reliant, and his body could not keep pace with his spirit.  In his mind, Nick thought he was 45 years old and capable of doing anything he put his mind to.   The family made every effort to ease his way in his last 4 years.

Nick was strongly shaped by his desire to succeed personally and to raise a family.  He was a driven worker, and always focused on providing for his family.  From fighting Nazis as a young man, to crossing the Atlantic to build his future, he led a uniquely interesting life.  He would say that one of his proudest achievements was earning his American citizenship.

Like all men, he was flawed.  His pride sometimes got the better of him.  He never liked to admit mistakes and was reluctant to show humility.  He was raised in a “children are to be seen and not heard” era, and struggled with the 1960’s / 1970’s more progressive times.  He wanted to be in control of events, and that at times spilled over into micro-managing and not giving other space to learn from their own mistakes.  He cared deeply for his sons, and later his grand-children (8), and did much to advance their lives while sometimes falling short and enabling them.  He was meticulous in his work and life habits, and held others to his high standards.  He was always willing and went out of his way to help others, particularly with physical needs.

Issac Newton once said, “If I can see so far, it is because I stand on the shoulders of giants”.  Nick’s sons and grandchildren can all say that this Dane who came to America with literally nothing in his pockets, built a life and an environment that has allowed two generations to start farther ahead and thrive.  The Nicolaisen Family has been able to rise to a higher level.  As one grandchild said, “He is the tallest man I have ever known”.

He is missed, and his loss is deeply felt.  The family has the faith that he is now in a better place.  Able to lay down his burdens, and go to prepare a place for his wife and family to gather in the hereafter.

Nick Nicolaisen lived a life that mattered.  A life of provision, a life of achievement, and a life of purpose.  If life is a big canvas, Nick threw allot of paint on it.  Nick believed that the path to become the person he was destined to be was through hard work, perseverance, and strong ethics.

“What lies behind us, and what lies before us are tiny matters compared to what lies within us” – Emerson