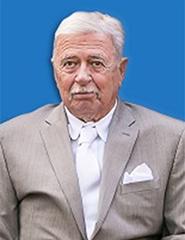 Ken Burks, 79, passed away on Monday evening in the care of his devoted wife, Judith Anne, and the wonderful staff at the SECU Hospice House in Bolivia.

Ken was born in Red Bay, AL to David and Ollie Mitchell Burks. Ken’s career culminated in construction and manufacturing management for major companies throughout the United States. He retired in 2003 after working for the Cedar River Paper Company/International Paper in Cedar Rapids, IA. Ken and Judith moved to Oak Island that same year and Ken worked part-time at the St. James Plantation Members Club helping to maintain the golf course.

Ken loved being outdoors on his deck (with a beer!), golf, western novels and movies, crime television shows, and almost every sport from little league to professional.

In addition to his wife, Judith Anne, Ken is survived by his stepson Paul Winford Fox III (Scott Falmlen), a brother, David (Sherrie), his two four-legged constant companions, Chewey and Blondie, and three adult children, Angela, Tammy, and Timmy. He was predeceased by his parents and a son, James K. Burks, Jr.

The family would be pleased for friends and family to remember Ken by making a contribution in his memory to Lower Cape Fear Hospice/ SECU Hospice House, Bolivia at www.lcfh.org .

The family would also like to thank the caregivers who supported Ken in his last weeks including the staff on the third floor at Novant Health Brunswick Medical Center.