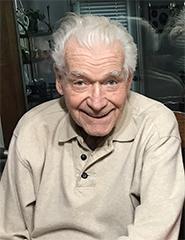 A resident of Carolina Shores, N.C., Jim was born January 20, 1929, in New Brunswick, N.J., one of eight children of Francis Newmeyer and Margaret Roth, and lived the first 60 years of his life in the same neighborhood in East Brunswick, N.J., where his father and brothers also built homes, not including two years in the U.S. Navy (1946 – 1947). He served on the U.S.S. Franklin D. Roosevelt, a Midway-class aircraft carrier, and was a star athlete on the 2nd Fleet Atlantic Champions Football Team. Jim was a carpenter by trade, joined the East Brunswick police force in 1953, and made sergeant in 1960. He was made lieutenant in charge of the uniform division in 1964 but took charge of the investigative division in 1967. He was promoted to Captain of Detectives in 1969. Jim studied criminology and police management at Rider College, Indiana University and the FBI National Academy, where he graduated in 1973. He finished his career as East Brunswick’s Deputy Director of Public Safety in the absence of a director, having turned down the top job in order to preserve his rank and membership in the Fraternal Order of Police, retiring in 1987.

Jim married Martina Wallace of New Brunswick, N.J., on August 25, 1951. They lived in the house he built in East Brunswick until her death in 1987. They had five daughters who survive them: Barbara Newmeyer of Charlotte, N.C.; Maureen Newmeyer of Yonkers, N.Y.; Linda MacRae of Apex, N.C.; Joann Barros of Franklin, Tenn.; and Jamie Litty of Laurinburg, N.C.

Jim married Alice Steup of Randolph, N.J., on February 14, 1992, and became stepfather to Kenneth Steup of Randolph, N.J., Donald Steup of Verona, N.J., and Jeffrey Steup of Waxhaw, N.C., all of whom survive him. Jim and Alice built a home in Carolina Shores, where he spent the rest of his life but enjoyed traveling the United States, Europe and Australia in their retirement. Jim continued contract work in masonry and finishing homes in the area and helped to build the Boundary House restaurant in Calabash, N.C.

He is also survived by 13 grandchildren and a younger sister, Anne Mason, of Oregon City, Oregon. He was preceded in death by brothers John Newmeyer, Francis Newmeyer and Thomas Newmeyer, and sisters Marguerite Sandor, Mary Hillhouse and Agnes Plaganis.

In lieu of flowers, please consider a gift to the Jim Newmeyer Memorial Award for a student majoring in criminal justice at the University of North Carolina at Pembroke:  https://uncp.edu/give/?special=cjjn