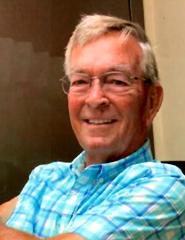 John was born in Hamlet, NC on June 24, 1943 to the late Sam Henry and Marie Griffin McGuirt. He is survived by his brother, Sam McGuirt of Fletcher, and his sister Margaret Teal of Brevard.

John lived a full, rich life. He graduated from Monroe High School in 1961 and then attended Wingate and High Point College until he enlisted in the Army Reserves in 1963 and served his country until 1969. He married the woman who was the love of his life, best friend, and mother of his 3 children, Pam Masline, on August 1, 1964. They were married for 57 years.

John was a salesman at the heart of his career. He sold commercial trucks, but his most treasured sales experience was owning his own business, Harrisburg Power Products, where he worked daily with his son, Scott. Once he and Pam moved to Ocean Isle Beach, he was able to continue sales working part time at Carolina Power Products.

Whether you called him John, Dad, or Grandaddy, the man (the myth, the legend) has left us with many ways that we will always remember him: His appreciation for Pepsi, Reese’s, Tagalongs, Midland banana pudding, Hershey kisses, peanuts, biscuit gravy, golf, gardening, riding lawn mowers, and laughs (both appropriate and inappropriate). Our family will continue to laugh, reflect on all your jokes and comments, choose to be happy as you said you wanted, and most of all, stick close.

In lieu of flowers, donations may be made in memory of John McGuirt to the Lower Cape Fear LifeCare Hospice Brunswick House at 1414 Physician’s Drive, Wilmington, NC 28401.

The Celebration of Life will be conducted at 3:00pm, Saturday, November 13 at the chapel of Brunswick Funeral Service, Shallotte, NC.

Visitation will be one hour prior to the service.

Inurnment will be on Saturday, December 4th at 11:00 at Lakeland Memorial Park in Monroe, NC.