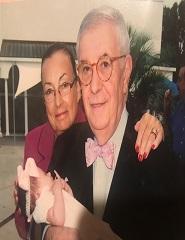 Mr. Kefalas was born February 3, 1943. He graduated Dematha High School, and received his Bachelors degree from American University. He married Carolyn High in 1968, and they operated restaurants in the D.C. metropolitan area.

Mr. Kefalas had a passion for coaching and mentoring. He loved working personally with all his players, whom he considered not just players, but family. He started his coaching career in Basketball with High School students and progress to the professional level. His style of coaching and determination brought championships at every level to his players on and off the court.

He applied the techniques that he acquired through coaching basketball and life to his mentoring career in the corporate world. He pushed people to reach their highest potential in sports and life. He cherished the word of God, his life on earth, and time spent with family.

Mr. Kefalas is survived by his wife, Carolyn, his son John “JJ” Kefalas, his daughter and son-in-law, Ashleigh and Chris Orrock, and two grandchildren, Sophia Kate and Adilyn Grace Orrock.

A service at St. John the Baptist Greek Orthodox Church, Myrtle Beach, South Carolina will be held Monday, November 11, 2019 at 10:30. The burial will be private.

Private on line condolences may be sent to www.brunswickfuneralservice.com