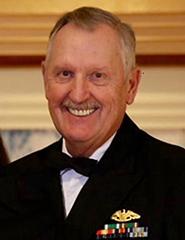 John graduated from the United States Merchant Marine Academy, Kings Point, NY in 1974. He started his career with the Army Corp of Engineers before returning to Kings Point where he was a professor for 27 years. John was inducted into the USMMA Athletic Hall of Fame. He served in the Naval Reserve for 30 years where he achieved the rank of Captain.

John was larger-than-life. In his youth, he was an exceptional athlete dedicating his time to baseball, basketball and football and participated in all three sports in college. He was a passionate fisherman and loved being on the sea. He was active in his retirement spending time traveling with his wife, golfing and socializing with his friends. Family was John’s top priority. He will be missed by all who knew him.