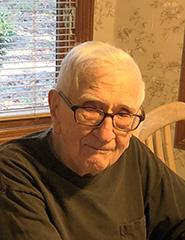 John Rowe passed away peacefully at his home in Ocean Isle Beach North Carolina on July 8, 2019. He was 95 years old.

John was born in Detroit MI on July 23, 1923 to the late Joseph and Jennie Rozniecki. He fought for his country in the Army on the front-lines during World War II, spent 40 years as an executive for United Brands in Detroit, New York and Boston and retired at Brick Landing Plantation with his wife Vivian in 1985.

He was a great father to his three kids, a great grandfather and a loving husband. He always put his kids and his family first and was a successful business executive. He was a really kind man, a gentle soul and an inspiration to everyone that had the privilege to know him.

Over the last several years he loved wearing his WW2 hat when he went out to eat as strangers would thank him for his service, talk with him and sometimes buy a meal. He loved golf and that is partly why Vivian and John moved to Brick Landing, but he described himself as a “hacker”.

He had an amazing and somewhat sarcastic sense of humor and it found its way into almost every situation. This sense of humor continued to be alive even as his illness grew over the past several years. He would tease (mouth off as he called it) the caretakers, nurses, waitresses and his family to lighten things up and to make people laugh.

A memorial service will be held on Friday, July 12, 2019 at 2:00 in Brunswick Funeral Service Chapel. Shallotte. Inurnment will take place following the service in St. Brendan the Navigator Roman Catholic Church Columbarium.

In lieu of flowers the family request donations be made to the Alzheimer’s Association at www.alz.org.