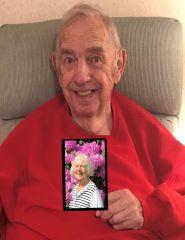 In addition to his parents (Charles and Edna Mae Pero), he is proceeded in death by his brother, Charles.

He was proud to have served his country as Corporal in the US Army from October 1953 to September 1955 and often seen wearing a Korean War Veteran’s baseball hat.

John spent the majority of his years living in Hubbard, Ohio. John’s profession was as a school educator. His teaching career started as an Industrial Arts (woodworking) at Sharon High School (1958-61) and then went to Wilson High School (1961-74). During this time he earned a Master’s of Education from Westminster College, PA in 1972. He then accepted a position at Hubbard High School as a Diversified Co-Operative Training Coordinator (1974-77). His final teaching position was at the Mahoning County Joint Vocational School as the D.C.T. Coordinator until 1985.

He owned and operated Hubbard Driver’s Training School from 1974 and continued the business until his retirement.

He enjoyed his vacation home in Calabash, NC that he purchased in 1993 and finally made North Carolina his permanent home last year in May.

His final resting place will be with his beloved wife, Pat in their hometown of Meadville, PA.

A service will be held for the immediate family at a later date.