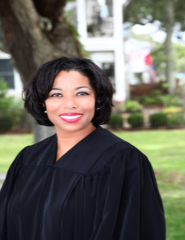 The daughter of an 82nd Airborne paratrooper and two public school principals, Judge Ola learned early in life the value of hard work, education and public service. These values fueled a trailblazing journey, a journey that not only enabled her to use her court to bring justice to those deserving of such, but healing to many who needed recovery rather than incarceration.

Judge Ola grew up in Spring Lake, North Carolina, and later her family moved to Brunswick County. She followed in her father’s footsteps, graduating from Fayetteville State University before attending North Carolina Central Law School, where she graduated in 1990 with a Juris Doctorate. She worked one year in private practice with then North Carolina Speaker of the House Dan Blue before returning to her Brunswick County home to serve as a county prosecutor.

In 1993, only two years after returning home, Judge Ola was appointed district court judge. She would be the youngest judge serving at that time in North Carolina. She would serve in this role for seven years before being appointed by former Governor Jim Hunt in 2000 to serve as a “special superior court judge.” She travelled 21 counties in this role, telling friends and family her motto was “have gavel will travel.”

During her time as judge, she fostered the county’s drug treatment court, helping hundreds of residents find sobriety and reduce inmate population and costs. Her drug court program created a national template that has since been used in other effective drug court programs throughout the United States.

Her transformative vision for her courtroom came from a love for the people whom she served, albeit, a tough love. Judge Ola fervently believed in the power of tough love to change a life for the better. That belief helped countless people recover to lead healthy, productive lives.

In 2018, for this and her many other accomplishments, Governor Cooper awarded her the Order of the Long Leaf Pine.

In 2010, The Honorable Governor Beverly Perdue awarded her the “Old North State Award.” In 2017, The Honorable Josh Stein, Attorney General for the State of North Carolina presented Judge Ola the “Dogwood Award” for her “dedication to keeping people safe, healthy and happy in their communities.”

Judge Ola was preceded in death by her father, Mose Lewis and brother, Derrick Stovall. She is survived by her loving husband of 16 years, Reginald Holley, her mother, Doris Lewis, and her brother, Cliff Lewis and wife Donna; and sisters, Peggy Walker and Pam Lewis. She is also survived by many beloved family members as well as a host of friends.

From noon until 5 p.m., Friday, January 3, Judge Ola will lie in repose in the Rotunda of the Brunswick County Courthouse, with the family receiving visitors from noon until 2 p.m., The courthouse is located at 310 Government Center Drive, NE, Bolivia, N.C., 28422. A memorial service will be held at 2 p.m., Saturday, January 4 at the Odell Williamson Auditorium on the campus of Brunswick Community College, 150 College Road, NE, Bolivia, N.C.

In lieu of flowers, the family requests contributions be made to: Friends of Brunswick County Treatment Court, P.O. Box 10818, Southport, NC 28461.