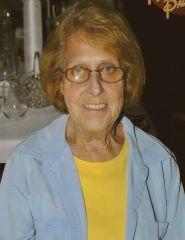 Born in Brunswick County on March 5, 1945, she was a daughter of the late Henry Todd and Robie Clemmons Todd. In addition to her parents, she was preceded in death by her husband, Gene Danford; brothers, Chester Todd, Kelly Todd, and Roy Todd.

Graveside services will be conducted on Wednesday, October 28, 2020 at 2:00 pm in Chapel Hill Cemetery, Shallotte, NC officiated by her son, Rev. Ricky Danford.