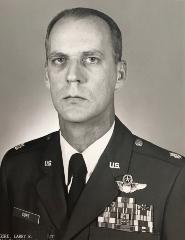 Lt. Colonel Larry Ronald Gore, 72 passed away peacefully, December 25, 2019, with his loving wife, Jackie Grady Gore by his side. He was the son of the late William H. and Myrtie Merritt Gore. Larry was reared in Delco, NC where his parents instilled a strong work ethic in their children and made sure the Gore family was active in church and school activities. Larry was a 1965 honor graduate of Delco High School, where he was president of his senior class and was an outstanding baseball, basketball, and football athlete.

In 1969, he graduated from the University of North Carolina at Chapel Hill where he served four years in the U.S. Air Force ROTC. Larry went on to serve 22 additional years in the U.S. Air Force as a combat pilot where he flew the famed AC-130 aircraft in the Vietnam War. Throughout his military career, he not only served as a pilot but also was chosen to be a pilot instructor. During his tenure, Larry served throughout Europe, East Asia, and the United States of America and had the honor of training the first U.S. Air Force female pilot. Larry considered it an honor to serve his country and always expressed that he was “blessed beyond measure.”

After Larry’s retirement from the U.S. Air Force in 1991, he lived in Texas where he owned a Financial Services Business. In 2012, Larry moved back to North Carolina where he met and married the love of his life, Jackie Grady Gore. Larry and Jackie resided in Carolina Shores. They volunteered with Stand Against Trafficking (StAT), a non-profit organization in which Larry served as Chief Financial Officer and later as Chief Executive Officer. He was a devout Christian, Bible Scholar, and an active member of River of Life Baptist Church in Sunset Beach, NC. Larry was also preceded in death by siblings: George Gore, Charles Gore, Micky Gore, Thurman Gore, Sylvia Gore Woodcock, and Annette Gore Bordeaux. He is survived by his wife, Jackie Grady Gore; daughter Carla Brown Henderson and husband Darryl, 4 grandchildren and 5 great-grandchildren, brothers Archie D. Gore, Craig Gore, Keith Gore, and a sister, Ethel Gore Mays, as well as many beloved nieces and nephews whom he considered to be his own children.

Funeral Services will be held at 11:00 AM on Thursday January 2, 2020, at First Baptist Church of Delco, Delco, NC.  Burial will follow in the Delco Cemetery. Viewing will be one hour prior to the service at the church.

Private on-line condolences may be sent to: www.brunswickfuneralservice.com.

*In lieu of flowers, the family request contributions be made to one of the following:

4.  A charity of your choice