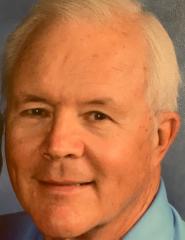 The eldest son of the late Sigmund and Alice Schreiber, Larry was born in Sioux City, IA on April 18, 1941. He was a 1959 graduate of Heelan High School.  Larry was awarded a football scholarship to Iowa State University where he played for the Cyclones for four years and in 1964 became the first in his family to graduate from college.

Upon graduation, he embarked on a career in business with R.J. Reynolds in the sales department while also serving part-time in the Army Reserves and National Guard.  Larry’s career at RJR took him and his family to six states and the U.K. before settling in Winston-Salem, NC.  After 32 years, he retired with RJR as a senior vice president of sales and marketing.

Larry was very involved in the communities he lived in and particularly enjoyed his years of coaching soccer and Pop Warner football.  When Mount Tabor High expanded to a four year high school, he helped organize its booster club as a parent and was very active in securing funds to build the present Spartan football stadium.

Upon retirement, Larry and his wife Sheila moved down to the Holden Beach, NC area where he enjoyed golfing and fishing.  He also treasured his years of traveling with Sheila and being a playful Grandpa with his eight grandchildren.

Services will be held on Saturday, January 11, 2020 at 1:00pm in The Holden Beach Chapel, 107 Rothschild St, Holden Beach, NC 28462. Following the service, there will be a Celebration of Life reception at the Lockwood Folly Clubhouse, 19 Clubhouse Dr SW, Supply, NC 28462.

In lieu of flowers the family asks that charitable donations be made to either of the following:

Private online condolences can be made at www.brunswickfuneralservice.com