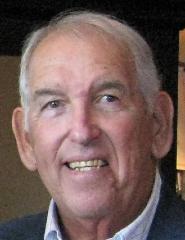 Born in Bronx, N.Y. on July 2, 1938, he was the son of the late Louis R. Pesce and Santina Dainotto. He was raised in the Bronx and Hartsdale, NY and attended Archbishop Stepinac High School in White Plains, NY, graduating in 1956. He went to Iona college and pursued a BA in History with the goal of going into education even though his advisor said he wouldn’t make a good teacher!!!

While attending college, Lou went back to Stepinac to begin his long and illustrious career as a football coach. One that eventually took him to the fields of John Jay High School in 1967. Besides being an exceptional football coach, Lou was an avid historian and took his passion to the classroom teaching Humanities & Social Studies for 28 years. He touched as many people in the classroom as he did on the football field and demanded excellence in both pursuits. If you had the pleasure to be his student or player, you know how extraordinary of a man Lou was. He was truly a Renaissance man!

If you ask Lou what his greatest accomplishment was, he will tell you it was marrying his childhood sweetheart Mary Elizabeth (Betsy) and the loving family they created and shared for 58 years.

Lou had a hidden talent that only surfaced after he retired from teaching. He became an accomplished painter with an artistic eye to see the beauty in art and capture it in his paintings.

Louis’ family will receive all that loved him, at Seaside United Methodist Church, on June 11th at 3:00 pm.

Memorial Donations can be made to the loving care Lou received his last few days from the hospice group: Lower Cape Fear Life Care - https://lifecare.org/donate/

Online condolences may be sent to the family at www.brunswickfuneralservice.com and…