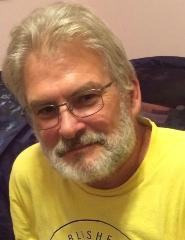 Mark Blair Woodburn, 64, of Oak Island, NC, passed away on June 24, 2020 at his home. He was born in Charlotte, NC, on December 6, 1955, the son of the late Ralph Alexander Woodburn and Doris Ruth Snider Woodburn of Salisbury, NC.

Mark started his railroad career with Seaboard Coastline/CSX. He later became an Engineer with Amtrak and retired with 27 years of railroad service. He was a member of the First Baptist Church in Salisbury, NC. He loved being a Paw Paw, fishing, being on the water, the beach, and his dog Emma. He was also an avid Hockey fan. He greatly loved his family and will be deeply missed.