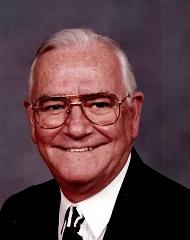 Rev. Mark Owens, 91, of Holden Beach, NC died Thursday, July 8, 2021. Born in Robeson County, NC, on March 29, 1930, he was the son of the late Major and Nora Owens. He was the only boy in a farm family of eight girls. He attended Mars Hill College and Wake Forest Baptist Seminary and began his career as a Baptist minister, serving North Carolina churches in Whiteville, Greenville, Southport, and Hudson. Following the death of his first wife, Enna Lou, he moved with his three small children to Shallotte, North Carolina, and became the pastor at Calvary Baptist Church. He began teaching high school to supplement his income and eventually became a full-time educator, serving as a high school and middle school principal and Associate Superintendent of Brunswick County Schools. During his early teaching career, he met and married Joan Owens and they celebrated their 50th wedding anniversary on June 27, 2021. In his retirement he enjoyed raising chickens, gardening, attending church and being with his grandchildren.

His grandsons will serve as pall bearers.

Online condolences may be sent to: www.brunswickfuneralservice.com