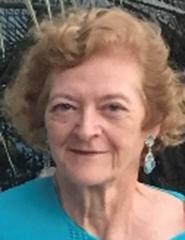 She was born in Brunswick County on September 22, 1943, a daughter of the late John Preston Lewis and Alda Spencer Lewis. In addition to her parents, she was preceded in death by her husband, Michael Russ, and a granddaughter, Morgan King.

She was Past National President of the Woodmen of the World, and a member of the local lodge, Carolina Bay Board of Residences Representative, a choir member at Camp United Methodist Church, and was honored to help establish Family and Consumer Sciences Program, Mary Russ Endowment at NC State University. She was retired from Brunswick County Cooperative Extension.

A Celebration of Life will be conducted Thursday, June 6, 2019 at 2:00 p.m. in Camp United Methodist Church, officiated by the Reverend Richard Vaughan. Burial will follow in the Brooks Cemetery.

The family will receive friends one hour prior to the service at the church.

A reception will be held at the home of Gloria and Harold Bland following the services at the cemetery.