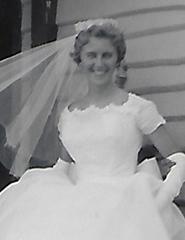 Nancy Winona Chase, 78, of Supply died February 13, 2017. She was born in Brockton, MA on March 10, 1938 to Robert Wyatt and Esther Hefler Wyatt. She was a 1958 graduate of Whitman High School where she was in the school choir, glee club, senior class school play, honor society and manager of school’s basketball team. She was a graduate of Chadler School for Women where she completed two years of study in one year. She was a good tennis player, won Best in Show in floral competition, and served as a judge of floral design.

After graduation, she was employed as an Executive Secretary for a Maritime Lawyer. In this capacity she worked on the Andria Doria case. In addition she worked at US Steel, Atlantic City Solicitor, MIT, Harleysville Insurance and as a School Aide after retiring.

Services will be conducted at 3:00 PM on Sunday, February 26, from Sharon United Methodist Church by The Rev. Eddie Hill.

The family will receive friends for one hour prior to the service.