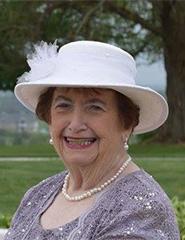 Patricia Ellen Cejka (Pat), 87, of Carolina Shores passed away of natural causes on Tuesday, August 6, 2019. She was born on December 11, 1931 in Schenectady, NY to the late Agnes and Raymond Quinlan. Patricia is preceded in death by her husband Joseph and sister Kathleen. Patricia is survived by sons, Joseph (Sheila) and John (Anne); daughters, Kathleen, Erin, Kerry (John) and Tracy (Fred); 13 grandchildren, 5 great grandchildren, 11 nieces and nephews, and numerous great nieces and nephews.

Patricia worked for the Historic American Building Survey in Washington, DC and Fairfax County Government in Fairfax, VA until she retired and relocated to Carolina Shores, NC. She was very active in St. Brendan the Navigator Roman Catholic Church as a greeter and usher where she was affectionately known as the “hat lady”. Patricia was dearly loved and will be sorely missed by all.

A funeral mass will be celebrated on Tuesday, August 13, 2019 at 10:00 am in St. Brendan the Navigator Roman Catholic Church. A visitation will be held one hour prior to the service in the Brunswick Funeral Service Chapel, Shallotte.