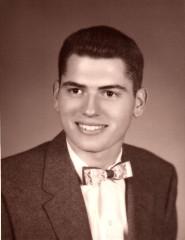 He was preceded in death by a sister, Mary (William) Buschor and a nephew, John Amos (Elizabeth) Ridenour.

Dick was a graduate in 1957 from Delphos St. John’s School, Delphos, OH. He played basketball and football; and was an assistant football coach for Delphos St. John’s School. He was a graduate of St. Joseph’s College, Rensselaer, IN, with a Bachelor degree. He then studied law at Ohio Northern, Ada, OH. He was a co-owner of House of Vogts Restaurant in Delphos, OH. He then went into the Hotel business managing Hospitality and Holiday Inn’s. He became owner of Ridgeway Motor Inn in Blowing Rock, NC. He sold the Inn and retired in Southport, NC. He enjoyed reading and gardening.

There will be a private service for the immediate family at a later date with burial in Evergreen Cemetery, Champaign County, St. Paris, OH.

Memorial contributions can be made to American Heart Association or a charity of your choosing.