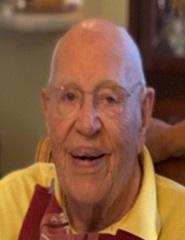 Richard William “Dick” Barthelme, age 94, of Sunset Beach passed away November 14, 2020 at his home surrounded by his loving family. Dick was born July 31, 1926 in Patchogue, Long Island, New York, and was the only son of Harry and Dorothy Barthelme.

Dick grew up on Long Island, later attending the Naval Officer’s Program at Colgate University and served in the Navy during WWII. He graduated from the Academy of Aeronautics, NY in 1950.

He began his engineering career with Goodyear Aircraft Corporation in Ohio, working on design of a retractable, tricycle landing gear for a lighter than air ship (blimp). This was the first of its kind and probably the last. With the Korean War looming, he returned home to Long Island to join the Engineering team at Grumman Aerospace Corporation, Bethpage, NY (1951). He had a productive career that ultimately would span over 40 years and would involve engineering challenges and breakthrough with trains, planes and space shuttles.

Dick’s engineering career for the most part was dedicated to the design and engineering of systems related to the takeoff and landing of various types of Aircraft. These included the E2A (Hawkeye) with the first Hawkeyes going to sea aboard the USS Kitty Hawk in 1961; the C-2A Greyhound which became the primary at-sea delivery aircraft for the US Navy to transport personnel and cargo aboard underway aircraft carriers from shore bases; the Gulfstream I twin engine corporate transport; the F111 F Aardvark multipurpose tactical fighter bomber capable of supersonic speeds, V/STOL or vertical and /or short take-off and landing aircraft; the F-14 Tomcat deployed in 1974 and served as the US Navy’s primary maritime air superiority fighter, fleet defense interceptor, and tactical aerial reconnaissance platform into the 2000s; HiMAT (Highly Maneuverable Aircraft Technology) an experimental remotely piloted aircraft the was produced for a NASA program to develop technologies for the future aircraft, the Space Shuttle which was a partially reusable low Earth orbital spacecraft system operated from 1981 to 2011 by Nasa, The Grumman TLRV(Traced Levitation Research Vehicle) an experimental train that operated like a hovercraft using a cushion of air instead of rails and various classified projects.

He also partnered a patent for a ship compatible launch, retrieval and handling system for vertical take-off and landing (VTOL) aircraft. The invention was directed ta a handling system for VTOL aircraft in which launch and retrieval operations are greatly enhanced when they are attempted from a moving platform; namely, a ship’s deck on the open sea.

Along the way, Dick attained his license as a New York State Professional Engineer (1971). He retired from Grumman in 1991 but continued on as a consultant with them on instructional materials which would serve as guides and texts for future employees who would follow in the engineering field.

His career was very important to him but didn’t compare to his family. He always cherished the time spent with his loved ones and close friends. Everyone that knew him well would agree that Dick was at his best sitting around a table sharing stories or memories. Dick also liked “playing” in his garage fixing something, building something or figuring out how something worked. He just had a love for life and sharing it with those around him.

Dick’s first marriage produced a son, Richard L. Barthelme, who proceeded him in death in 2000.

On June 27, 1959 Dick married Joyce Elaine Howe who proceeded him in death in 1991. Their marriage produced 3 children Brian, Gwen and Jeffrey. They raised Howard Gregory who became an older brother to the other 3.

He married his best friend Kathleen-Ann Brady (nee Cassidy) on May 30, 1993. After a couple of relocations they established their home in Sunset Beach in 2003.

To the care givers and friends that showed their love and provided care for Dick during these trying times, there are no words that can express how you have touched our hearts. You have become family to us and caring angels to Dick.

There will be a visitation from 4 to 6 PM Thursday November 19, 2020 at Brunswick Funeral Service, Shallotte Chapel.

Memorial services will be 10:00 AM Friday November 20, 2020 at St. Brendan the Navigator Catholic Church in Shallotte, inurnment will follow in the Church Columbarium.

Memories and condolences may be shared at: www.brunswickfuneralservice.com.

The family requests that in lieu of flowers, donations in Dick’s memory be made to the Lower Cape Fear Hospice and Life Care Center, 1414 Physicians Drive Wilmington, NC 28401.