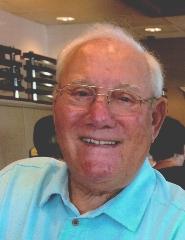 He was born in Queens, NY, a son of the late, Dominic and Frances Flaccavento.

After high school, Bob enlisted in the United States Army, and was stationed in Germany. Upon returning home, he opened a hair salon, which is where he met his future wife, Elsie! After they married in 1961, they relocated to The Pocono Mountain area of Pennsylvania, where they owned and operated The Willow Dell Resort and later The Heritage Motel, before retiring to North Carolina in 1986.

Bob was an avid golfer and really enjoyed their trips to Pinehurst and Daytona! He loved his Dallas Cowboys and the Duke Blue Devils; but his greatest love was that of his family!

Surviving are his wife of 58 years, Elsie (Marakowitz), his daughter, Debbie Lenzi and husband Jim; son, Robert Jr. and wife, Jill and his grandchildren, Andrew, Brett, Megan and Zachary.

A celebration of life will be held 2:00 PM Saturday January 11, 2020 at Brunswick Funeral Service Shallotte Chapel.

The family will receive friends one hour prior to the service at the funeral home.

In lieu of flowers memorials may be made to: Duke Children’s Hospital.