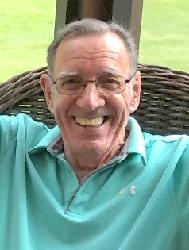 Bob Soucek died Tuesday, January 19, 2021. Born on November 5, 1937 in Chicago, IL. He was the son of the late Frank and Louise Soucek. He graduated from Taft High School in Chicago, IL in 1955 and was a member of the bowling team. He served for 2 years in the United States Army at Fort Jackson in Columbia, SC. He then moved back to Chicago and was the owner and barber at Mr. Howard's Barber Shop for over 35 years. He enjoyed traveling, fishing, reading, water aerobics, and spending time with family and friends. He was a lifetime fan of the Chicago Bears. Bob loved to tell jokes and was known as being the life of the party.

Surviving are his daughters, Robine Soucek and Renee (Bryan) Beck; son, John (Debbie) Soucek; grandchildren, Camille Beck, Walker Soucek and Apryl Beck; brother, Ron Soucek and sister Judy Altman and many nieces and nephews. He was predeceased by his wife Carole. Bob passed on the day what would be Carole's 79th birthday and their 58th wedding anniversary.

The family extends great appreciation to Sheila Constable, his friend and caretaker.